In writer, director Emily Ting’s refreshing take on the walk-and-talk romance, Ruby (Jamie Chung), a Chinese American toy designer from LA, visits Hong Kong for the first time on business. Finding herself stranded, she meets Josh (Bryan Greenberg), an American expat who shows her the city.

The trailer for ,  It’s Already Tomorrow in Hong Kong displays a colorful scenery with Hong Kong as its backdrop, if not a character.  Very aware but slowly immersed with eachother’s energy rather than the big city, the two fall into a carefree conversation, with the presence of that boy-meets-girl tension, and ultimately attraction.

Real life couple, Chung and Greenberg, are also executive producers on the independent film, along with Ting.  Sophia Shek and Ting are its producers.

Ting’s charming directorial debut takes full advantage of the chemistry of its leads, the playfulness of their exchanges, and the magical landscape that is Hong Kong at night. We’ll predict this one as a great contender for a “first date” movie.

Take a look at this exclusive clip and the poster for the film, and if you happen to be in Los Angeles, you can catch the film’s premiere at LA Film Festival, on June 12th.

The lead actors walk through a lively Hong Kong street talking about the toys Ruby (Chung’s character) designs, and the creative names of the stuffed animals add to the charm and humor of this engaging clip. We look forward to seeing the film. 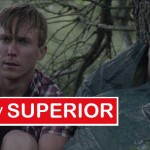