Captured on camera, the bumpy road to equality in Utah is not short on drama and the good fight brought by the members of both sides. The filmmakers offer a glimpse at the Mormon Church’s influence in state politics and the quarrel happening inside the gay community while they try to stay united and focus on the real fight, for justice.

Utah remains the one state in the union with one singular church asserting major influence on state politics and the way policies are shaped. In fact, it was the Mormon Church that spent massive amounts of money in the fight against gay marriage which was known as Proposition 8 (Prop 8). Proposition 8 was ultimately ruled unconstitutional by a federal court (on different grounds) in 2010. The decision finally went into effect on June 26, 2013, following the conclusion of proponents’ appeals.

CHURCH & STATE the true story of the triumph of LGBTQ community vs the Mormon Church and the fight for same-sex marriage and equality.

CHURCH & STATE has been described as a true story of triumph, setback and a little-known lawsuit that should have failed, but instead paved the way for a U.S. Supreme Court decision that legalized gay unions nationwide.

Directed by Holly Tuckett and Kendall Wilcox, CHURCH & STATE, follows an inexperienced but determined gay activist, Mark Lawrence who makes the fight his personal mission. With a strong will and charisma, and not often appealing techniques he finds allied in a small Salt Lake City law firm, Maglebury & Greenwood agreeing to take the case on. The firm’s senior partner, Peggy Tomsic becomes the Lead Counsel, as she has had her own mission to marry and be able to legally adopt her son.

The film showcases the members of the community bringing the fight to each other under the inescapable wide shadow of the Mormon Church and its power to shape and make Utah’s politics. The film shows the infighting within the LGBTQ community who can lose this hard-fought battle if they cannot agree and unite for their cause.

Watch the Trailer for CHURCH & STATE below. 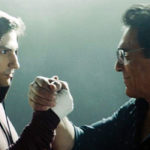