I really want Chloë Grace Moretz to succeed. I’ve loved her since the KICK-ASS movies, but she just hasn’t found the right transition project to take her from child actress to YA to adulthood.

SHADOW IN THE CLOUD is tainted by an unfortunate history of a re-written screenplay, originally penned by Max Landis, he of the sexual assault accusations.  In this #MeToo era, this film comes off as too much paint-by-numbers, a committee checklist for a production company to make an adequately woke, feminist movie.

Moretz stars as Maude Garrett, an apparently English WW2 pilot who commandeers an American bomber in the Pacific with her mysterious, top-secret orders to deliver a top-secret package to another base.

The rest of the crew taunt her with sexist comments. Having a woman on a warplane is bad luck, you see, so the crew complains and ridicules her, even when she spots a gremlin-like a giant bat man – climbing outside around the plane, tearing pieces off.

Directed by newcomer Roseanne Liang, who has said she reworked Landis’ script, SHADOW IN THE CLOUD still feels like an overextended TWILIGHT ZONE episode (notably, NIGHTMARE AT 20,000 FEET) which is especially groan-worthy given that Landis’ father, John Landis, was the director of the notorious 1983 THE TWILIGHT ZONE segment which resulted in the onset accidental deaths of actors.

The WWII, horror film, SHADOW IN THE CLOUD screened at the year’s AFI FEST.

There’s plenty for Chloë to do in SHADOW. A good portion of the movie is of her alone in a gun turret reacting to the voices of the sexist crew. She does a passable English accent. She’s also Angelina Jolie tough as she battles the gremlin, fights off Japanese planes, and has an ending scene that, without spoiling, will make any audience spit take in laughter as a Kate Bush song swells to play over the end credits. Final check on that committee checklist? Nailed it!

If Chloë Grace Moretz wanted to do a feminist take on a classic story, someone should direct her to watch ENOLA HOLMES on Netflix.  SHADOW IN THE CLOUD is too hamfisted an approach. 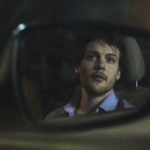 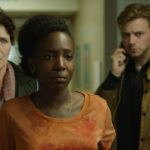