To the movie going public, celebrities are the actors, the stars, sometimes the directors.  To the industry, there are superstar producers, and the late Allan Carr was a well-known and successful producer, manager and promoter who arguably zenithed at the height of the disco era in the late 1970s.

The man behind the hugely successful musical GREASE (1978) was also behind the disastrous 1989 Oscar broadcast that featured Rob Lowe and Snow White singing “Proud Mary.”  This biopic respectfully traces Carr’s life from a chubby closeted kid from Chicago to a powerful Hollywood producer who was openly closeted (code word “flamboyant”), battled a lifelong weight problem, and surrounded himself with handsome young men (twinks) eager to advance their careers.

Producer, manager extraordinaire, Allan Carr threw the Hollywood Parties that defined the 1970’s.  As a marketing genius, Carr built his reputation with massive hits such as GREASE (1978) and wouldn’t let you forget it.

Directed by Jeffrey Schwarz, who also directed biopics of Tab Hunter and Divine, THE FABULOUS ALLAN CARR is a straightforward biography that gives scant mention of the more salacious details of Carr’s life, including his infamous house parties, instead focusing on Carr’s ambition to make entertainment and to be a power broker in Tinsel Town.  The biography reminds Hollywood insiders that Carr’s successes were much more influential than the Oscar folly that tainted his reputation until his 1999 death of cancer.  And as a manager, he propelled the careers of Ann Margret, Marlo Thomas and Marvin Hamlisch. Oddly, there are no interviews with Margret nor the late Hamlisch about Carr’s work on their careers.

Carr was heavily influenced by the golden era of Hollywood, the 1930s and 1940s, and sought to bring back glamor through his musicals, GREASE, CAN’T STOP THE MUSIC (aka The Disco Disaster Village People origin story), and GREASE 2.   He was also a Broadway producer who won a Tony for LA CAGE AUX FOLLES.  Carr pioneered the “limited release” film strategy with THE DEERHUNTER, opening that film to rave reviews and anticipation in just New York and Los Angeles.  And even his Oscar disaster yielded permanent change where Oscars are now presented with the line “And the Oscar goes to….” from the previous, “And the winner is…”  LA CAGE AUX FOLLES’ 1996 film adaption, THE BIRDCAGE, became the top grossing LGBT film of all time.

For a bigger than life personality like Carr’s, this biography is thin on personal details. What works best are the behind-the-scenes stories of how Carr put together the Village People musical CAN’T STOP THE MUSIC – a 1980 disco dud that probably hastened the end of the disco era.  Steven Guttenberg talks about auditioning wearing short-shorts.  Disappointingly there’s no interview with Caitlyn Jenner who was cast then as Carr’s fixation, Bruce Jenner. And of course, a good portion of the documentary covers the excitement and planning that went into the Oscars – to Carr, the crown jewel of his Hollywood career – only to become the laughing stock of the world. Carr’s last hurrah would be the 25th anniversary of GREASE in 1998.

Watch the Trailer for the documentary film below. 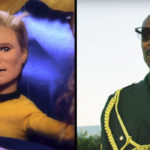 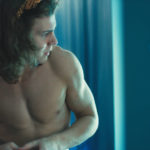