The first thing horror aficionados should know is that THE BOY BEHIND THE DOOR along with the superb THE DJINN are the two premiere features of the writing/directing team of David Charbonier/Justin Powell.  These two flicks won heaps of praise in the film festival circuit, landed the team a major representation deal, and have made it on Thrillist’s Best Horror Flicks of the year.

The movie opens in an idyllic treed park with two 12-year old boys, Kevin and Bobby, playing and dreaming about getting away from it all. “Friends to the end!” they promise each other before they’re violently abducted into the trunk of a car. The boys find themselves trapped in an old house in the middle of an oil field, victims of a couple who are all the more creepy by being so normal, MAGA sticker on their car.

THE BOY BEHIND THE DOOR is a wild, white-knuckled ride and a great introduction to a talented young cast and a new filmmaking team.

THE BOY BEHIND THE DOOR is a stylish, retro horror reminiscent of other recent refreshing breakthroughs like DON’T BREATHE, GET OUT and IT FOLLOWS where the filmmakers have stripped away layers of B-movie cheese and other Holllywood horror clichés and conventions to deliver an excruciatingly tense thriller.  What conventions? Hollywood hates to put children in peril and of course, the dog always lives.  With THE BOY BEHIND THE DOOR, a story about two young boys kidnapped, threatened and abused, the audience immediately knows there are no holds barred when the first kid is harmed.

Lonnie Chavis and Ezra Dewey shine in THE BOY BEHIND THE DOOR directed by David Charbonier and Justin Powell.

Charbonier and Powell have a great eye for camera work. The hunt throughout the house is nail-biting tight as the boys make the twists and turns and near misses to escape. And crucially, Charbonier/Powell also have a great eye for casting new talent, especially when these kids carry the entire film.  Their two young leads, Lonnie Chavis (THIS IS US) and Ezra Dewey (THE DJINN), are vividly real and full-bodied characters as they deal with the all too possible horror of being kidnapped and molested. The movie rests firmly on Chavis’ shoulders as he grimly hunts through the house trying to find a way to free his friend.  Dewey, who brilliantly starred in THE DJINN as a deaf-mute being harassed by a malevolent spirit, also delivers a heartbreaking performance as a terrified child victim who musters up the strength to fight back against his abductors.

Even though these two boys are very much in danger, the filmmakers let the implied and subtle add to the horror. A dungeon, blurry photographs, a house full of locks all add to the horror.  There is no smirking promise of a sequel. And thankfully, the kidnappers remain very average. It’s all too easy and cliché to make cartoon monsters out of them.

THE BOY BEHIND THE DOOR isn’t perfect.  There are some logic issues – probably the most blatant one was a scene where Bobby decides to mop a bloody floor. How does he have the time and concentration to clean up a floor – with one handkerchief no less – before someone walks in?  There are also some nice Easter egg odes to other horror films – in particular to THE SHINING. Overall the movie is a wild, white-knuckled ride and a great introduction to a talented young cast and a new filmmaking team.

Below, watch the official trailer for THE BOY BEHIND THE DOOR starring Lonnie Chavis and Ezra Dewey. Distributed by Shudder, the film is playing now in the U.S.

THE BOY BEHIND THE DOOR - Official Trailer 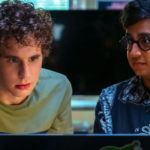 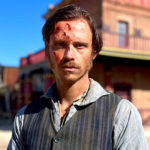